I have drawn a black line through April. Days to have been spent in D.C. at meetings, days to have been spent sight-seeing in the Pacific, regular days of worship and classes and workouts, all stretch before me now as blanks. You probably have some black lines and some blanks to reckon with, too. We’ll all be getting to know our own walls a little better in the next few weeks. If being agoraphobic qualifies me to speak on confinement, I have a few encouragements for communing without community. 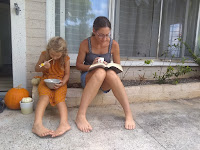 Enchantment requires time and attention. In anxious days, the soul struggles to settle into story. But if we can shut out the news feeds, we may find an unprecedented opportunity to dust off dormant imaginations. What have you never had time to learn, study, enjoy, reread, marvel at? The tyranny of the urgent is broken. Suddenly the gift of time, in the ugliest of garbs, has been handed to many. We people of the Book often lack the hours to be people of books. Perhaps the days of lockdown offer us precious time to reenchant ourselves with beauty and story and truth. 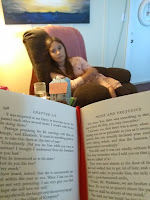 Story feeds restless minds. The children are restless. We have a captive audience, like it or not. Draw their minds into action while they’re stuck in the house with stories of adventure and sacrifice and heroism, read aloud. Do all the voices if you can. If this isn’t a family habit and you fear a lukewarm reception, start small, but pack a punch. Make some cocoa, light a fire or some candles, and read “The Cremation of Sam McGee” in low, spooky tones. Short and swashbuckling, Call It Courage is good by a window, better in the yard, best in a treehouse.

Story allays our fears and cushions our grief. Story can shrink us down to size. Even a dwindling coffee supply or rationed toilet paper can feel daunting, and uncertainty can overwhelm. Story enters into fear and pain and gives words to sorrow. Heroes, those who really lived, and those imagination brought to life, make us brave. They stand on their own precipices and remind us that we are not alone on ours.

The greatest story reassures us of victory. All the good stories echo back the first story. Imbibe them all, but more than ever, read the original, the story of God and his people. It ends well. Pray the Psalms alone in your room as David prayed them in the cave of Adullam. Around your own dinner table, sing the hymns that express your current suffering in the hopeful words of the church triumphant.

Ponder anew, what the Almighty can do.

Posted by Elizabeth Vaughn Do at 10:58 AM No comments:

Email ThisBlogThis!Share to TwitterShare to FacebookShare to Pinterest
Labels: American Culture, Life As I Know It, School Days, The Mamahood

Here are some unrelated facts.

I cure writer’s block by picking up a good book. One of the books currently on my nightstand is about narration. I have two different daughters using two different writing curricula and one mostly just drawing dinosaurs. I am reading a whole stack of books aloud to my kids, and they are reading through a much larger stack of books on their own, and all of them are writing their own secret, magical novels, for fun.

Here’s what I think based on these disparate experiences. If I were going to start over, with a new batch of offspring, I would have several theories.

1. If you read to them, they will read eventually. I wouldn’t invest a lot of time in a reading curriculum at all, at least until the child showed that they were ready to read. They do this. You’ll be eating breakfast cereal and they will say, “H….hhhh…hhh… does this say honey?” Or you’ll be reading a book to them and they’ll suddenly stop you and ask, “Which word says ‘Mercy Watson?’” And you’ll point it out. And you’ll know they are ready to start learning to read. But if you read to them in your bed in the morning, and on the couch and on a picnic blanket at the park and in the car and in the dentist’s waiting room and in their bed at night, the moment will come. 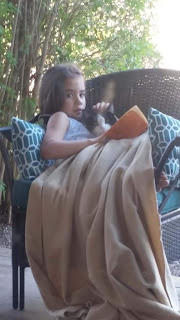 3. A writing curriculum can’t make a writer. Writing curricula CAN help refine the tools they learn from hearing great books read aloud. Whenever I have had good writing teachers, I find that they give names to things I was already doing, or to things I already loved about my favorite authors. The curricula can help you learn why certain things are compelling, and why other things don’t work. But style can’t be learned this way. It can only be articulated. Style is learned by listening and copying and narrating and just loving the best examples of literary style. Bask in beauty and beauty will be the overflow of your heart.

Each of my girls’ writing classes produce stilted, formulaic papers. This is by design, to study form. But an academic approach can’t teach imagery or subtlety or natural pacing. Good art massages the brain into new shapes, and from these shapes spring unique style. Kids who marinate in literature will already use fluently the tools their teachers diagram in class. Through the curriculum, they learn how to recognize them, and how to name them.

The real teachers of style must be Arnold Lobel and E.B. White and Laura Ingalls Wilder and Emily Dickinson and Jane Austen and E. Nesbitt and C.S. Lewis and the Brontes. The formation of a literary soul is a mystery. But it is a mystery we can probe comfortably, from beneath a blanket, on a couch, over a good story.
Posted by Elizabeth Vaughn Do at 9:21 AM 2 comments:

Email ThisBlogThis!Share to TwitterShare to FacebookShare to Pinterest
Labels: Foundations, Life As I Know It, School Days, The Mamahood, Words and Meaning

Eighty-Percenting® is an attitude.
I do like beds to be made. A made bed is a sheltered island in a typhoon or a jewel in a calm sea. But no piles of throw pillows, please. Nothing that would impede the daily achievement of a made bed, please. Eighty-Percenters need reasonable goals. Therefore, I take five minutes every morning to give a quick once-over to my bedroom before seizing the day. And then, I often place a basket of unfolded laundry on the made bed. A chore undone, but framed in general order. That’s Eighty-Percenting.

Eighty-Percenting® is permission.
Eighty-Percenting is a rubric for triaging your responsibilities. When you feel that a shower would be refreshing but dread all the labor of a shampoo, Eighty-Percenting allows you to do one without the other. When there is still a risotto pot soaking in the sink, but you are tired and want to read a quick chapter before your eyelids get too heavy, Eighty-Percenting helps you choose the important over the urgent.

Eighty-Percenting® is a boundary.
Eighty-Percenting helps you choose where to draw arbitrary lines. My kids have been known to dress like circus clowns, bag ladies and everything in between. Well, I have touchy aesthetic sensibilities. I also love my creative, uninhibited kids. As an Eighty-Percenter, I have two strategies for treading the space between public ridicule and the crushing of tiny souls. Option One is to employ the Line Item Veto. (“You can wear the muumuu, the striped leggings, and the sequined boots, but I need you to lose the furry scarf.”) Option Two is to braid their hair. (“Now at least you look like someone cares.”) Eighty-Percenting helps you keep your concerns rationally ordered.

Eighty-Percenting® is a gateway.
Sometimes, Eighty-Percenting is also a soft start to Hundred-Percenting. An overwhelming task seems friendlier if I have given myself permission to do just so much. But as Mary Poppins aptly says, “Well begun is half done,” and everyone knows that the momentum of getting underway often carries you through to the finish. Eighty-Percenting gets the ball rolling.

If you’re a pathological perfectionist, or on the other side of the spectrum, a committed Netflix binger, Eighty-Percenting is probably not for you. If my laundry basket is still bothering you, or you are currently wearing a muumuu and sequined boots, Eighty-Percenting is probably not for you. That’s OK. It’s quite possible that the only Eighty-Percenter out there is me, drinking yesterday’s reheated coffee and happily reading a great book in the sunshine.
Posted by Elizabeth Vaughn Do at 10:58 AM 1 comment:

Email ThisBlogThis!Share to TwitterShare to FacebookShare to Pinterest
Labels: Life As I Know It, Lighten Up Already, The Mamahood
Older Posts Home
Subscribe to: Posts (Atom)

"I would scorn in this and in every other case to deal in equivoque; I believe language to have been given to us to make our meaning clear, and not to wrap it in dishonest doubt." --Charlotte Bronte in Biographical Notice of Ellis and Acton Bell