Once Upon a September

I’m a sucker for the warm feeling of camaraderie. Sports offer that sense of shared, vital purpose.


Today, eating wings in a sports bar, there was a moment where some of the early games were finishing as several more games were kicking off. The Iggles had won, so we were primarily concentrating on our sticky-fingered lunching, but around us were a surprising number of Oakland fans, on their feet, watching a nail-biting finish to their game. The Raiders had just gone for 2 and were trying to hold their thin lead as the clock ticked down the last forty seconds.


Across the room though, on another screen, in another city, a giant flag was rippling over a field and a lone trumpet was singing out the anthem. 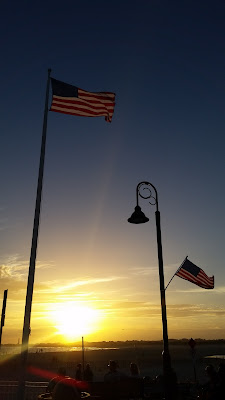 Suddenly, the Oakland fans fell silent and listened to the music as the last moments of their victory slipped by unheeded. When they began to cheer, GaleForce asked, “Did their team score again?”


It reminded me of a moment in the fall of 2001 when my best friend and I had scored free tickets to sit in the Flyers’ company box for a game. They were fantastic seats and the game was tight.


Then, between periods, the president’s post-9/11 speech was aired. Instead of refreshing their beers, people sat watching it on the big screens above the ice. Suddenly, though, his voice was cut off mid-sentence so that play could resume.


The players stood, awkward, not moving to the center, but looking around. And from somewhere, maybe from the ice, a chant began and swelled.


Both teams pumped their fists in chorus with the crowd. They refused to take the ice.


The voices built to a cheer as the president’s face filled the screens again and the players and fans alike sat to watch in a palpable atmosphere of solidarity.


This time, over wings, wasn’t like that time. But Oakland fans, like Philly fans, are known more for their brazen passion than for their grace and sportsmanship. And, for a moment, all the many-jerseyed passions united in patriotism again.
Posted by Elizabeth Vaughn Do at 9:20 PM No comments: