Hebrews 11:1 Now faith is the assurance of things hoped for, the conviction of things not seen.


Some words lead double lives.  Their meanings change depending on where or by whom they’re uttered.  Hope is one such tricky word.  Like people who clean up their language on Sundays, Hope has a church-y personality and a world-y one.  If you’re going to say it in a churchy way to a world-y person, it’s helpful to know the difference, and how your meaning may come across in consequence.
When I hear hope spoken of in non-Biblical contexts, it tends to involve vague optimism.  Like, “I sure hope Cookie brings home some doughnuts tonight.”  When I say it like this, it can mean several things.  Maybe I mentioned doughnuts specifically and want him to remember.  Maybe he knows I like doughnuts and brings them home often, making my hope reasonable.  Or it could be a completely random thought, a craving put into words, and with next to no chance of having occurred simultaneously to Cookie.
Hope in this sense can inspire or encourage, but ultimately succumbs to circumstance.  You can spur people to all kinds of heroic action with the right pep talk, but once the situation turns bleak, this hope peters out.
Biblical hope is a different animal.  If world-y hope is wanting optimistically, church-y hope is waiting expectantly.  Where world-y hope holds out for the possibility of something better, church-y hope looks forward with assurance of it.
Of course, that doesn’t mean knowing the specifics of every ending.  Romans 8 explains, “Now hope that is seen is not hope. For who hopes for what he sees? But if we hope for what we do not see, we wait for it with patience.”
Hope in the New Testament is tied continually to eternal life.  This hope is living, because Jesus Christ lives (1 Pet 1:3).  This is not a small detail.  Because church-y hope awaits something better after this life, it does not succumb to despair in this life.  World-y hope dies when the situation gets inescapable.  Church-y hope transcends circumstance.
There are always suckers who leave a one-sided ballgame after the 7th inning stretch, you know, to beat traffic.  Church-y hope sits it out.  Church-y hope expects upsets.

Posted by Elizabeth Vaughn Do at 6:30 PM No comments:

I Already Gave You My Money

I recently did a favor for a girl scout.  I ordered Sports Illustrated magazine from the daughter of my dad’s coworker.  I thought I had done a kind thing.  Until I found this postcard enclosed in my order packet. 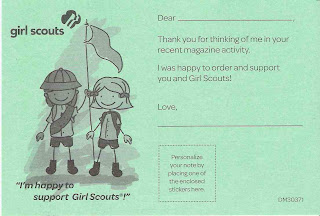 It turns out, SHE has done ME a favor.  Or so I’m to inform her by means of this postcard.  I can even attach a sticker from an enclosed sheet, my choice of several with encouraging messages to further build her self-esteem.


Soliciting is awkward.  You are often putting people out.  When I had to sell pizzas and hoagies door to door as a kid, my mother called it character-building.  But now it’s an opportunity for hollow self-esteem building, instead.
Even in the case of the single exception to the awkwardness rule, Girl Scout Cookies, the selling of which IS a favor to me, I’m not sure the girl needs a personal commendation for it.  Did she invent the cookie?  Bake it herself?
We’ve all heard the cogent arguments that self-esteem-building apart from real accomplishment ends badly.  But for Christians, there’s another element wherein self-esteem, good or bad, is at best irrelevant and at worst an obstacle to forming solid identity.  One of my favorite preachers said in a recent sermon that while self-loathing needs the cure of the gospel, so does self-love of the coolest-kid-in-school, cheerleading-captain, girl-scout-post-card-recipient variety.
Confidence can be developed through real accomplishment.  Identities should be built on the foundation of Christ’s undeserved yet unshakeable love for us.  Neither can be earned through guilting people into magazine purchases.  Dang.
Posted by Elizabeth Vaughn Do at 10:01 AM 1 comment: