Little People Under the Big Sky

The second time through the Little House series, I ground to a full stop at the chapter “Fish Trap” in On the Banks of Plum Creek. Had I given this full notice on the first read-through with Songbird, I might have been less concerned about her natural timing in learning to read. It’s a lovely moment, where Ma, the trained schoolteacher, announces that it’s high time that Laura, nearly eight, shove off to school and learn to read. She digs out her treasured primers and sends her barefooted children across a mile of fields to the schoolhouse, where Laura learns to read in the first half of the first day, being fully ready for such studies. 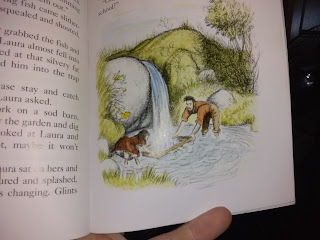 Between Ma’s announcement, however, and her new Teacher’s effective lesson, comes another telling moment. Laura does not want to leave off exploring the creek and fields. And so her Pa takes her fishing. He lets her help build the trap, waits to explain its mechanism until she has observed it in action herself, names for her the fish he knows. Models prudence as they let go the fish they don’t strictly need. Lingers in appreciation of the beauty of the moment under the waterfall. And all the while offers wisdom in encouragement (“You’ll like school, Laura,”) and admonition, (“Be thankful you’ve got the chance.”) No one can think that the day she masters C-A-T surpasses the day before it, spent by the creek with her father. We cannot so truncate the meaning of education.

Charlotte Mason recommends six full years of “passive receptive life, the waking part of it spent for the most part out in the fresh air.” Not in drawing of shapes and letters or counting of beans, but in taking in the world and learning one’s relationship to it. Lying for hours at a time in tall grass so that a rabbit will come quite close, this is Laura’s first education. I cannot imagine that a full day’s programming of group activities from the age of 2, with small, fenced playground breaks, would have developed in her an equal desire and ability to describe the world around her so poetically and powerfully.

The resourcefulness which will enable a family of children to invent their own games and occupations through the length of a summer’s day is worth more in after life than a good deal of knowledge about cubes and hexagons, and this comes, not of continual intervention on the mother’s part, but of much masterly inactivity. 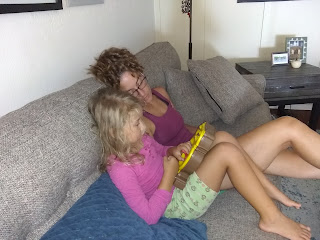 How do we let go in the face of cultural opposition? Gleefully! I have posted here about how deeply I have felt the wisdom of our predecessors in moments when I am brave enough to jump off the hamster wheel. Though she is six and we do read books and recite poetry together and play with the hands of the clock, two of Geronimo’s primary occupations (used in both senses of the word) are the catching of lizards by sunlight and flashlight, and the perfecting of her own lizard-behavior-techniques by the practice of being a lizard for several hours a day. This last is often done to a particular movie score, the instrument entrances and musical turns of which she knows minutely.

Perhaps her greatest educational pursuit, however, like Laura’s, is in living as a human among humans. She has sisters to fight with, friends to cede territory to, boundaries to learn by observation or, more often, by discipline, and ideas to sound out in spontaneous conversation. In our era, the most important lesson she is learning is the meaning and value of proper authority. Because her parents are human, she sometimes gets a bad example for contrast, but because our authority provides mostly consistent security (the bite on her finger confirms this when she doesn’t let the lizard go on command,) she will avoid the modern error of dismissing authority altogether, and by knowing its good, she will better discern its abuses in the world.

How I homeschool now is different than when I started eight years ago. Every year I do more poetry and fewer, or more appropriate, wonder-oriented facts with littles. And it will continue to change as I dive deeper and deeper into my own reading and reflect on how much I still don’t know. That category, the yet unknown, grows as I grow. There’s so much to marvel at, even in a lizard. 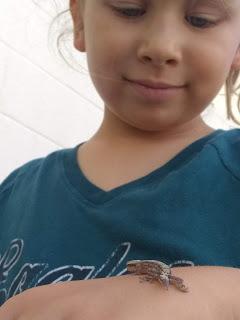 Posted by Elizabeth Vaughn Do at 3:06 PM

Email ThisBlogThis!Share to TwitterShare to FacebookShare to Pinterest
Labels: Foundations, Life As I Know It, School Days, The Mamahood