I found this essay, which I used when I applied to grad school long, long ago.  I guess I feared Self-Destruction By Ignorance long before I drank Classical Kool-Aid. 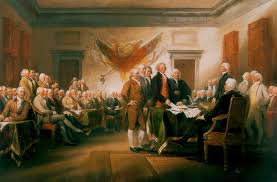 Democracy, often characterized by the freedom and equality it offers, is the best we can do with what we are given.  John Locke's Second Treatise, on which much democratic theory leans, emphasizes man's natural state of liberty and reciprocity.  The value of these elements is felt universally, perhaps especially by those who withhold them, for their lack enables such oppressors.  Only where ideas freely find both expression and criticism, can they be properly evaluated and progress be made.  Among governmental systems, Democracy offers man the most freedoms: freedom from oppression, freedom of thought and expression, freedom to earn and possess, but additionally, through checks and representation, freedom from his own tragically flawed nature.


The human condition is the first challenge to democracy.  A man ultimately looks out for himself.  Locke writes that "good and evil, reward and punishment, are the only motives to a rational creature: these are the spur and reins whereby all mankind are set on work, and guided."  I suggest that it is more often the fear of punishment that checks our actions than an innate desire to flee evil; will not even the most upstanding driver accelerate a bit if he believes there is no officer around to notice?  The fact that section 6 of Locke's treatise declares that "no one ought to harm another,"  and that he must differentiate so firmly between liberty and license, attests to man's propensity towards the latter.  In the end, democracy preserves itself  by granting freedom in measure, and checking the human impulses that would otherwise destroy it.


Knowledge, however, not freedom, is man's stealthiest weapon.  Democracy's second limitation lies in its dependence on the informed reasoning of its constituents, for it is not synonymous with freedom; a body of voters may conceivably offer up its governance to a dictator or religious zealot.  The nature of democracy is only to allow the people to continually tweak their own society through consensus and representation, and without education and the ability to reason, democracy can be the undoing of a people.  Democracy combats foolishness in the same manner that it addresses human evil; it depends on systems of balances and on sheer numbers to sift out the bad.


There is nothing exceptional in a man's concern for his own interests.  The foresight to design a system that best secures those interests for all men over time is a rarity.  The founders of Democracy could not have believed in a perfect system, because they did not believe in the perfect human nature that such a system requires.  Though checks and balances are no certain cure for man's flaws, the brilliance of democracy is that it acknowledges the depth of depravity and ignorance, and systematically disarms them.
Posted by Elizabeth Vaughn Do at 10:31 AM